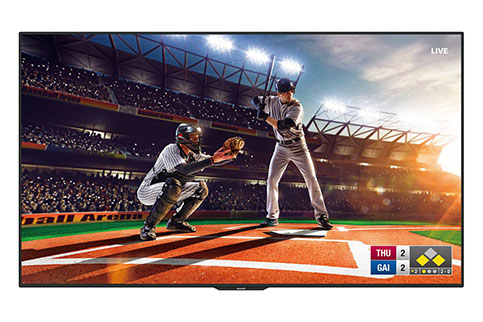 Display detailed 4K UHD signage content with the Sharp PN-UH701 70" Class 4K UHD Commercial LED TV. It has a 69.67" LED-illuminated LCD panel and features a 4K UHD 3840 x 2160 native resolution for viewing detailed high-definition content. The 300 cd/m² brightness output and 4000:1 contrast ratio help enhance visibility in areas where ambient lighting can't be controlled. The PN-UH701 is suitable for use in 16/7 environments and is equipped with HDMI and two USB inputs for multimedia playback.

The PN-UH series features a depth of less than 4", making it ADA compliant and giving it a streamlined look with minimal protruding parts. The thin bezel also makes for easy placement in offices, public places, stores, and other commercial locations.

With the built-in tuner, the PN-UH series display can be used not only for signage, but also for displaying over-the-air broadcasts. In high-traffic areas, you can use it for signage during the day and for 4K entertainment at night.

The PN-UH series can play photo slideshows and videos without a computer or set-top box, making installation more space-efficient. Play 4K UHD photos, Full HD videos, or music stored on a connected USB memory device. For your convenience, photos or videos can be played automatically.

With the LAN and RS-232C interfaces, you can control and monitor the PN-UH series display from a central location via a computer. This enables you to turn the display on or off, switch its input, or adjust the screen and settings.

The PN-UH series is designed to handle the daily demands of 16-hour professional applications.

The display and remote control can be locked to prevent unwanted adjustments by people in public locations such as stores and restaurants.

Subscribe to our newsletter
When you purchase your AV and UC solutions through
AVI-SPL, you're benefiting from our strong manufacturer relationships, buying power, expertise, and -- perhaps most important of all -- support after the sale.
Here's a list of all products.
©2020. AVI-SPL Inc. All rights reserved.
ContactPrivacy PolicyTerms & Conditions